Because of reading fiction with 5th graders, I had a student write this after reading Grandpa’s Mountain:

The Park did something wrong to do something right. It wasn’t black or white, right or wrong. It was shades of gray. ThinkQuest has made me think for myself. Now I don’t think what other people want me to think, I sort it out myself.

(from “Our Stories” on What Price This Mountain?)

About a dozen years ago I was teaching 4th grade and had to teach about the Civil War. The kids had to know some specific battles and the basic issues for the state test, but that wasn’t what worried me about teaching it–it was how to teach it to 9 and 10 year olds without the blood, guts and gore of teaching about war. I think about that a lot because I’m a softie who cries at anything, and I also have nightmares easily when I hear about cruelty–and I didn’t want to cause my students either nightmares or tears!

When studying the Civil War, I decided to teach the idea of conflict through the book, Across the Lines , which is a point/counterpoint between two young boys.  One is a slave who chooses to escape in the craziness of the master’s plantation being overrun by the “Yanks” and the other is the master’s son, who has always considered the slave his friend, without realizing the condescending attitude he held toward his “friend.” 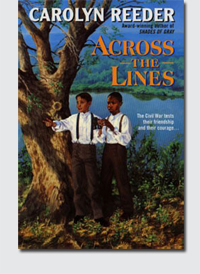 Because of reading the  fictional Across the Lines with students, I had a young Jewish student state in class that he, too, was nervous about learning about the Civil War and all the blood and horror it might include, but he really liked the way we had studied it, through books.  He went on to say something like, “When we began, I thought I knew what the Civil War was about–it was about slavery and I knew that was wrong.  But now that we’ve studied it, I know it was about more than that–it was about state’s rights and the federal government’s right to tell states what to do, and it was about more than slavery. I understand now that slavery was complicated, and it wasn’t just black or white. It really is shades of grey.”  (He is currently in college studying politics, fully intending to go to Washington and make a difference.)

(Both classes had been reading historical fiction novels by Carolyn Reeder, and one of her books is called Shades of Grey.) These are NOT isolated responses–read the other students’ thoughts on “Our Stories.”

The other day my Superintendent, Pam Moran, tweeted : “U of Mich study shows today’s college students: 40% less empathy than 20-30 yrs ago.”

Would you say my students had no empathy?  These groups are currently in college or freshly out.

Come on, Grant Wiggins–admit there’s a place for both fiction and non-fiction, and realize great teachers can do great things with a great piece of fiction.  We teach WAY beyond the fiction in the book.

Yesterday, Milton Ramirez, (@tonnet) re-tweeted a comment about inconsistency that intrigued me (which he often does), so I began tracing the conversation back to see the context.  Through doing that, I found @monedays, @TalkDoc2 and @JohnDMcClung having a conversation that was right up my alley–but I came late to the party due to my wonky  nTelos air card, so wasn’t in time to join in. However, I filled a whole page marking many of their comments as favorites!

I think these folks MUST have read the book, Lift, and they live it. . . their tweets are inspiring and thought-provoking. I know these favorites will give me much food for thought.  Hope  they do for  you as well!

(I just copied them from my favorites, so read from the bottom up if you want to read them in order.)

LOTS to think about here! If you read one of these and a story comes to mind, would you share it with us, please?

Thanks again, Milton, for helping me find these folks to follow! When I tweeted Milton yesterday, I sent @tonnet Thanks for the new people to follow this morning. Will blog later about the conversation I followed thanks to your RTs! :-),  he responded with these tweets:

tonnet @paulawhite I try to catch up with the immensity of information we have to deal with on a daily basis. Thanks 4 your kindly words & support

HOW TO: Develop into a Leader on Twitter « Bit Rebels
which led me to Bit Rebels. . . another great thinking resource for me.
My PLN ROCKS!

All over the edubloggerverse, folks are writing their 7 things people don’t know about them. One of my twitter buddies said he had 20 and was having a hard time choosing which seven to use. Of course we all have many more than 7, so how does one choose? Why did you choose the seven you chose to share? How did you choose? What did you leave out? Would we want to know those as well? These questions cross my mind as I think of which seven I am going to share. . .

1. In my late 20s I ran Rescue Squad in a small town in VA.  The squad was just starting up, and is still running today, almost 30 years later. It was an amazing experience.

2. My parents both died by the time I was 30, and I remember thinking “I am an orphan.” No matter how old you are, that sense of loss is profound. I simply can’t imagine feeling that as a child.

3. One of my most vivid memories is being a 4 year old and driving away from the cemetery where we had just buried my infant brother, who had been born stillborn. I was looking out of the car window and thought, “I will never see my brother in this life.” What astounds me at this memory as an adult is that even at 4 I believed in a life after death.

4. Another vivid memory is being 6 years old and deciding my younger brother, who was 4 and I should walk to town.  We took our toy tractor and began pushing it to town.  We got  almost a mile from home before a neighbor, who was coming home saw us, stopped and made us get in her car so she could take us back home.My mother always said I was too independent for my own good!  As an adult, I agree with her!

5. I have always loved stories. I used to tell them to my sister each night, and my brother, Rod and I used to climb in a huge clothes closet we had and he would tell me science fiction ones in the dark. My Dad wrote me letters in College that had tall tales in them.  I took my kids to the National Storytelling Festival in Joneborough, Tennessee for years, and I later took my grandson as well. I started a storytelling club at one of my schools, the Yancey Yarnspinners. I also supported the National Gallery of Art’s Teacher Institutes with digital storytelling for 7 summers, first working with Joe Lambert and Emily Paulos from the Center For Digital Storytelling, and then teaching podcasting to the participants. A story of mine, describing our county’s support of technology in the 90’s is in the ComputerWorld archives . I was a 2001 Smithsonian ComputerWorld Laureate.

7. I participated in Tweet-a-Book over winter break 2008. My Rescue Squad experiences were part of that writing. That circles back to number 1.