This post is a continued reflection of me going  into a Kindergarten class to do a series of lessons on graphs and wondering about the incidental learning K kids are doing while I’m in there.  The set up for this series of posts can be found here or here, I cross posted it.

So on Thursday, I went and introduced myself to them with a book called “Once Upon a Time”  where “A boy and his parents move to a new house where it seems there’s “Not much to do. / Not much to see.” As the book continues, the boy remains by the cottage, but familiar faces begin to dot the landscape: a golden-haired girl chased by three bears, a trio of pigs each toting a bundle of different building materials. Young listeners acquainted with classic nursery rhymes will quickly recognize the game and begin searching for their favorite characters.” (The quote is from Amazon’s review, and the picture below is from Amazon as well.) I was using it to see how well-versed the kids were about what are supposed to be familiar stories for young kids, so I wanted kids to call out and I wanted to see how many could name the characters as they entered the pictures. 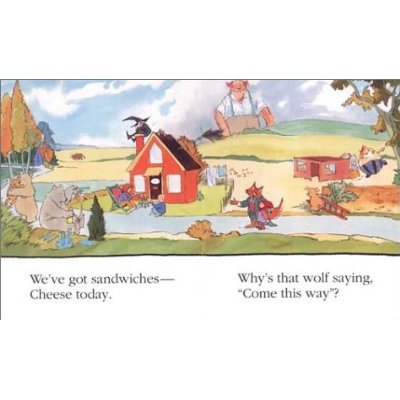 It was hilarious–kids were giggling, fidgeting, talking to one another and the teacher and I were just howling with some of their comments. It was also a hit–the kids couldn’t wait until I returned the next day to help them tell a story with “just dots and lines.”

So the next day I came back, read a fairly traditional rendition of The Three Little Pigs (Paul Galdone’s verison) and then I pulled out the paper where we were going to make a line graph and tell our story with “just lines and dots.” I modeled doing the worksheet shown here, and we then sent all of the kids to their seats to make their own story to take home.  What an eye-opener–just ask any teacher what they can see when you ask K kids to do a worksheet on the 17th day of school when you’ve just done it in front of them. You can see the kids who have preschool experience who have learned to “play school” well–they want to copy yours exactly.  You can see the kids who have little experience with writing… you can tell the kids who know how to line items up well and those who don’t get that detail…you can see names written (or not) and as they work together, you can clearly see kids who need support.

So I’m standing by a table with several kids who are struggling to do the dots and lines and I’m helping them along.  This activity isn’t set up to see who can do the worksheet perfectly, but to help us see who gets the concept of lines going up and down to symbolically represent high and low feelings of fear in the story.

As I was helping one child, two boys at the other end of my table began the “he wrote on my paper” call outs. I moved to lean down beside the closest one to me and a third child also said it, pointing to the boy beside her. (I’m beside a black kid, looking across the table at two white kids.) I immediately turn to the boy beside me (to stop his continued tattling) and  as I do so, I think to myself, “Dang, what are they thinking with me talking to the black kid first?”  I KNOW how kids watch everything the teacher does and read into it… so I’m now thinking,”This is a predominantly white school, and many of these kids haven’t much experience with other races. Are they reading into my looking to the black kid first that I think he’s guilty when the two white kids aren’t? I know I did it because he was closest and I can have a semi private conversation with him if I need to, but they don’t know that. What can I do to take any possible stigma away here?”

I then looked at both of them and said, “If you didn’t mean to make the other boy feel bad, please think of that next time you start to write on someone else’s paper–think how you’ll make them feel.”  And I backed off and went back to the kid I had been helping. They looked at each other and then went back to their own papers.

I hope they learned it’s not about placing blame.

I hope they learned I really don’t care who started it.

I hope they learned it’s about how you make someone feel.

Shaping behavior in a classroom is ALL about how you make them feel.

And when teachers shape behavior, we have to be cognizant of ALL the nuances–what kids might be learning incidentally if we always look to certain children first, or if we always choose certain children to be our helpers, or if our messages are not consistently about taking care of each other and not making others feel bad.

Shaping behavior in a classroom is all about how you make them feel.